Queensland's cycling laws enforced with technology should be adopted in BC. Photo: Rob Homer, Brisbane Times

Safer Passing Laws are paramount to cyclists' safety. Besides advocating for better cycling facilities, the BC Cycling Coalition has partnered with members of the BC Road Safety Law Reforming Group in hopes of amending the Motor Vehicle Act for better road rules that protect and reduce on-road fatalities for cyclists.

The Minimum Passing Distance Law -- also known as the MPDL -- has been introduced all over the world, including 28 states within the US. Several notable cities in Europe have paved the way for making biking the ultimate mode of transport, and down south, a strong "Share the Road" message was broadcasted primarily to improve cyclist safety.

In Queensland, a report after a two-year trial of the Minimum Passing Distance rule enforced concluded that motorists' awareness of cyclists within one metre of their proximity has increased significantly. In fact, survey results from the QUT review show that 75% of cyclists and 60% of drivers believe that they can accurately judge a one-meter distance from passing drivers and cyclists even when traveling at 60 km/h.

As of the end of November, there had been only three cyclist fatalities, down from 11 at the same time in 2013 before the changes were introduced. -Shadow Transport Minister, Scott Emerson (2015) 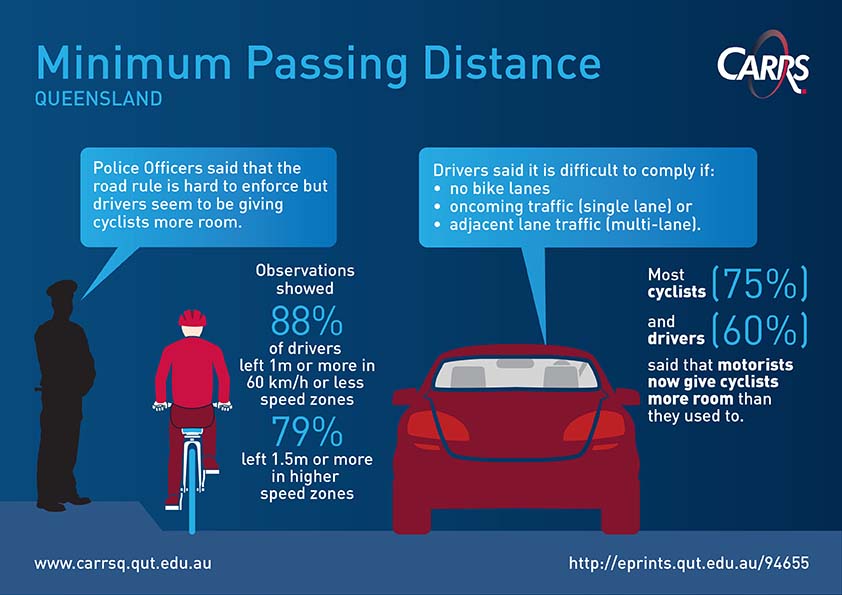 The BC Cycling Coalition wants British Columbians to be able to cycle and walk in safety. Our movement for the Active Transportation Strategy to be implemented provides facilities that will not only benefit the cycling community, but also our environment as we attempt to address climate change.

Although British Columbia has undergone several strategies to provide greener public transportation, cycling should be of priority when it comes to designing suitable infrastructure for pedestrian, cyclists' and motorists' safety.

We urge you now to take action now and write a letter to our government legislatures regarding this matter; highlight Queensland's two-year trial case to show what can be done.

QPS officers stressed the challenge of enforcing the MPD road rule. The difficulty lied within assessing whether or not vehicles were following the rules as there was no concrete evidence to prove so. Carrs-Q reported, "the officers felt that this inability to accurately determine passing distances leads to erratic passing manoeuvres".

Fortunately, since the enactment of the two-year trial, the QPS officers saw improvement in vehicle-bicycle interactions. Further suggestions to curtail ambiguity include conducting a series of road safety classes in the lead-up to the introduction of the road rule as well as in-class simulations of appropriate cycling passing distances and behaviour.

Help show lots of people support cycling and walking for everyone.

Please share. Encourage your friends and family to take action!


Show Emails Show Mailing Addresses Email Some
Note that your postal code may not always return your correct riding, MLA, MP and candidates. Contact Elections BC to verify your riding and candidates. Thanks to OpenNorth for the representative and candidate database.
Let the Premier and Ministers Know You Want a Safer Passing Law
Tell them about your close calls or crashes caused by drivers passing too closely. Let them know that a safer passing law and enforcement would would help protect your family and friends.
427 PEOPLE HAVE SENT EMAILS
73 needed to reach 500
427 PEOPLE HAVE SENT EMAILS
Send Email
Send using Mail App

By entering your email, you consent to receive essential updates critical to making cycling safer for your family & friends from British Columbia Cycling Coalition. We respect your privacy. Your info will not be shared. You may unsubscribe at any time.

By checking Send me email updates, you will receive action updates (1 or 2 per month) critical to making cycling safer for your family & friends from British Columbia Cycling Coalition. The larger our email list, the more likely the Province will improve cycling. You may unsubscribe at any time.

Thank you for supporting safer cycling in B.C. Your letter really helps!

Your message below has been sent to mailer.to and copied to mailer.cc

Please help with this campaign:

Your donation will help us reach more people who are passionate great cycling:

Please join me in helping to make BC safer for people who cycle and walk. Send a email in support of a Safer Passing Law in BC requiring motor vehicles to pass those cycling and walking by at least 1.5m.

Let the political leaders know how a Safer Passing Law would make cycling safer and more enjoyable for you and your family and friends.

Here is the message I just sent:

Tell them about your experiences of riding on BC's roads and dealing with traffic. It only takes a minute or two and will really help make a difference!

Please check your e-mail for a link to activate your account.