Cycling Routes Should be Direct, Obvious & Separated from Traffic

This is a test

To encourage cycling, bicycle routes should be as direct and obvious as possible. Direct routes require less effort and make cycling competitive with driving for a greater number of trips. Exposure to rain, heat, snow and cold is also less for shorter trips. 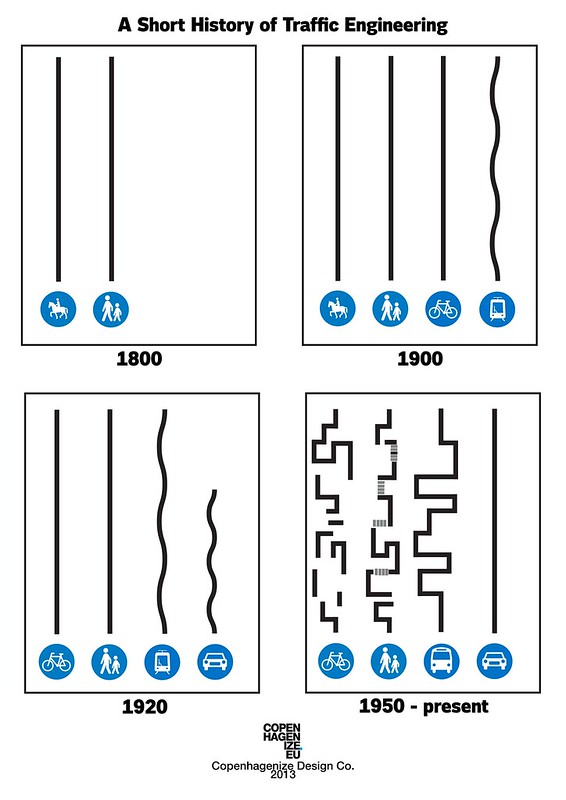 Complete networks of all ages and abilities obvious direct bike routes do cost money. That is why we recommending that the BC Government invest $1 billion over ten years to enable everyone to cycle for their daily trips in every season. Please sign the petition.

People just taking up cycling and visitors will likely not find convoluted out of the way routes. Even people familiar with a route will miss a turn once every so often while newbies may miss turns all together ending up lost or in an environment not great to cycle in. While signs help, they are easy to miss. Now, in specific circumstances, longer routes may  be better if they decrease cycling effort and time by avoiding hills and stops.

The Cycling in Cities research found that two of the top motivators for cycling are:

Of no surprise, the number one deterrent to cycling is safety concerns. In particular, most people won’t cycle on busy streets where there is no separation from motor vehicles.  More often than not, main streets are main streets because they are direct and flat. Because they are main streets, popular destinations including shopping, businesses, transit stations and homes are built along them. Thus, in the majority of instances, the best approach is to build separated bike lanes to protect the cyclists from the traffic thus making the direct route safe for cyclists of all ages.

This approach is confirmed by the Cycling in Cities Motivators and Deterrence research which found that people prefer bicycle paths along major streets over traffic calmed residential streets.

Unfortunately, often there is an tendency to attempt to divert cyclists along circuitous routes on streets with low levels of traffic. These attempts are rarely successful in attracting high volumes of people on bicycles.

The importance of directness is confirmed by other many studies and best practices documents including those below.

From Urban Adaptation - The bicycle as urban transport – learning from cycle cities:

The perceived risk of injury is the foremost reason why cycling is unappealing in our cities. Likewise, commuters desire an efficient means of transport, from their door to their destination, and will choose accordingly. Bicycle infrastructure must be as safe and direct as possible. At the network level directness is paramount. In the past both Copenhagen and Berlin have embarked on the back street strategy. This strategy ultimately failed in both cities. The reason is simple – back streets are neither direct or visible. Some used the new higher quality back street facilities, however the vast majority of cyclists refused to deviate from the more direct routes.

At the detail level, two points must be remembered; Firstly, bicycle paths must be physically separated. From both motor vehicles and pedestrians. 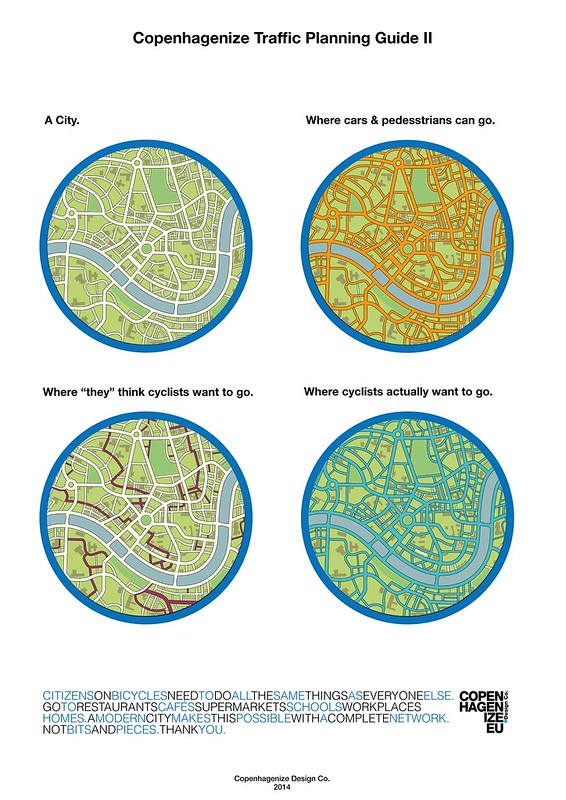 The Dutch Reference Study - Cases of interventions in bicycle infrastructure reviewed in the framework of Bikeability (page 25):

All else equal, a 1 percent increase in distance reduces the probability of choosing a route by about 5 percent and 9 percent for non-commute and commute trips respectively. That cyclists are highly sensitive to distance is consistent with the observed data. Half of all observed trips were less than 10 percent longer than the shortest path and 95 percent of trips were less than 50 percent longer.

Turns likely delay cyclists, and they also add the mental cost of having to  remember the correct sequence of turns. As expected, turn frequency is a significant negative factor in route choice. In the case of turns, for instance, the model predicts that an additional turn per mile (0.6 turns/km) is equal to a 7.4 percent increase in non-commute distance and a 4.2 percent increase in commute distance.

Complete networks of all ages and abilities direct bike routes do cost money. That is why we recommending that the BC Government invest $1 billion over ten years to enable everyone to cycle for their daily trips in every season. Please sign the petition.

Please check your e-mail for a link to activate your account.
Donate Membership Volunteer