Your voice for safe cycling in BC! 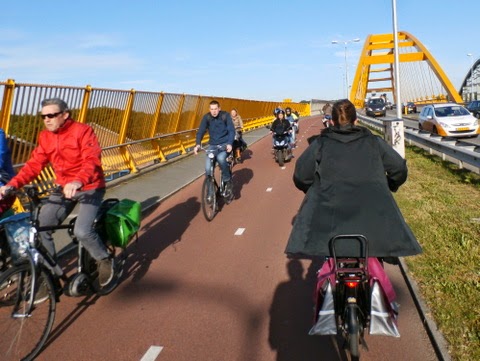 Especially when combined with the use of electric bicycles, Cycle Super Highways can dramatically increase the distances people are willing to ride thus significantly reducing the use of motor vehicles.

Keys to success is cost-sharing funding from senior levels of government and a coordinating body that can help ensure that routes are of a consistent high quality across jurisdictions.

Cycle Super Highways have been implemented or are being planning in countries including:

Our recommendations to the BC Government include:

or
Please check your e-mail for a link to activate your account.

Show your support for cycle highways in Metro Vancouver

One such solution is cycle highways which are suitable for all ages and abilities and would provide direct, safe routes across longer distances and connect communities and destinations across our region.

Building cycle highways would improve cycling efficiency and attractiveness, shift people out of other congested modes and provide benefits such as reduced greenhouse gases, healthier habits and viable active transportation options for residents and tourists to get to destinations across Metro Vancouver by bike.

Cycle highways already exist in countries such as Denmark, Germany, Norway, the Netherlands, and the UK and could be implemented along routes such as the BC Parkway, Lower Lynn interchanges, and parallel to sections of Lougheed Highway.

With your support, cycle highways could play a major role in achieving the Ministry of Transportation and Infrastructure's cycling policy objectives, and in doing so, significantly ungap Metro Vancouver's cycling network.

Here are some key points that you can incorporate into your letter...

Thank you for supporting cycle highways in Metro Vancouver, your letter really helps!

Your message below has been sent to mailer.to and copied to mailer.cc

Please help with this campaign:

Your donation will help us make cycling safer for all, visit www.bikehub.ca/adoptagap to support our work.

As part of a plan announced last week, the country will spend a massive 8 billion Norwegian Kroner ($1.25 billion CAN) creating 10 broad, two-lane, cross-country bike tracks in and near Norway’s nine largest cities, allowing longer-distance cyclists to travel with a speed and safety hitherto impossible. A key component of plans to slash Norway’s transit emissions by half, the bike highway scheme still faces some resistance. Not only is cycling in Norway relatively uncommon by Scandinavian standards, but the new highways will be constructed in a mountainous country that is cold and dark for much of the year.

These broad, twin-lane tracks will do more than offer protection, per se. They’ll allow cyclists to speed up safely, riding at up to 40 kilometers (25 miles) per hour and thus making longer commutes feasible. If they succeed, they should take pressure off roads and public transit and help to cut Norway’s fossil fuel use.

The investment should be worth it—if healthier Norwegians cycle around an increasingly car-free country with low- or zero-emission vehicles as a standard, schemes like the bike highway may end up paying for themselves.

Norway has around 5 million people, only around 10% more than BC. Plus the climate is similar and their current levels of cycling are not that much higher than ours.

Time for BC to follow Norway's lead and invest $1 billion in cycling including similar bicycle highways to help address Climate Change and reduce congestion. Please sign the petition and share it with your friends.

German Cycle Super Highway to Take 50,000 Cars off the Roads

It's a cycling dream: no red lights, no trucks, just a clear, smooth lane to zoom down with the wind in your face. Welcome to Germany's first bicycle Autobahn.

Fans hail the smooth new velo routes as the answer to urban traffic jams and air pollution, and a way to safely get nine-to-fivers outdoors.

As a glimpse of a greener urban transport future, Germany has just opened the first five-kilometre stretch of a bicycle highway that is set to span over 100 kilometres.

It will connect 10 western cities including Duisburg, Bochum and Hamm and four universities. Almost two million people live within two kilometres of the route and will be able to use sections for their daily commutes, said Martin Toennes of regional development group RVR.

Aided by booming demand for electric bikes, which take the sting out of uphill sections, the new track should take 50,000 cars off the roads every day, an RVR study predicts.

The new type of bike routes are around four metres wide, have overtaking lanes and usually cross roads via overpasses and underpasses. The paths are lit and cleared of snow in winter.

Cycle Super Highways are also being proposed for Frankfurt, Munich and Nuremberg.

We need Cycle Super Highways like this in BC. Help make them happen. Please sign the Cycling and Walking for Everyone petition and share it with your friends, family and co-workers.

A total of 28 routes with 467 km of cycle super highways are planned in the Copenhagen region. Eleven of these will be ready by the end of 2018. It’s a remarkable story of regional cooperation, forged by one big city and 21 of its smaller suburban neighbors, who came together around a common vision for moving commuters from using their cars to riding their bicycles.

Ironically, this regional success started with a failure. Back in 2007, city leaders in Copenhagen began looking for a way to reduce automobile congestion in the city center. They aimed to do what London and Stockholm did around the same time: create a “congestion charge” on cars entering the city.

Protests kicked up from the municipalities around Copenhagen. Their citizens would be particularly burdened by the extra cost to go to work or do other errands in the city. The project was dumped. With no congestion toll in sight, Copenhagen decided to tackle the problem from a completely different angle. Instead of deterring driving, why not encourage biking?

In some ways, the bike plan benefitted from the failed attempt at the congestion charge. For one thing, it was more of a “carrot” than a “stick” so the suburban communities were more open to it. One result of all this participation is that the cycling network includes a number of suburb-to-suburb routes. It’s not all hub-and-spoke routes radiating out from Copenhagen.

If inclusiveness was one goal, another was to dream big. Streuli didn’t want the original vision to be hampered by worries about cost. This freed the planners to develop innovative ideas like timing stop lights at road crossings to favor bikes rather than cars. Another idea was to include “conversation lanes” wide enough for two people to ride side-by-side and talk.

To encourage municipal participation, a cost-sharing structure was set up. Municipalities only pay half of the construction costs. Most of the other half is covered by a subsidy from a national fund for supporting bicycling.

A six-person secretariat was also set up as a neutral body to administer the project. Policy is set by a steering committee made up of executive-level civil servants from all participating municipalities. A project group consisting of traffic planners and other more technical people meets four times a year.

Germany is building an Autobahn for bikes as a way to help nourish its growing cycling culture among commuters. When completed, the Radschnellweg (translation: "fast bike path") RS1 will be 101 km of dedicated bike path, running between the cities of Duisburg and Hamm.

"The RS1 is not only a pioneer project for modern transport policy in North Rhine-Westphalia, but for all over Germany and beyond," says Ulrich Syberg, of the ADFC (a German bike association and advocate group). "When it’s ready, the world will look upon the Ruhr area and wonder, how many people can you motivate to switch from the car to the bike, and much this will relieve congestion in city centers."

We need Cycle Super Highways like this in BC. Help make them happen. Please sign the Cycling and Walking for Everyone petition and share it with your friends, family and co-workers.